Despite having a population of only about 120, Wytham village attracts many visitors who come to see this special, un-touched place. They comment on the tranquility of the village and its rural setting despite its proximity to Oxford and to main road communications (A34 and M40).

The village boasts a village shop, All Saints Church, the White Hart pub/restaurant and the world-famous Wytham Woods(known for its long term research projects based on its unique woodland environment).

Wytham is a village full of history, with records of the village in the Saxon times. The name Wihtham dates back to AD 957, meaning homestead of village concealed in a river bend in Old English. During the Medieval times, Monks on pilgrimage from Cirencester to Canterbury would pass through Wytham Woods. The hill offered them their first view of Oxford, and with the thought of having a hot meal there, the monks would reportedly burst into song, leading to the naming of The Singing Way. The location of the Wytham, west of the Thames, was previously the northernmost point of Berkshire before the County Boundary Change of 1974 moved the village into Oxfordshire.

The estate has been owned by several people over time. In the 10th Century, King Eadwig of Abingdon Abbey owned land in Wytham, North Hinksey and Seacourt – a village between Wytham and Botley, which was abandoned by 1439 following the plague. Eadwig’s land passed out of control of Abingdon Abbey with the Dissolutions of the Monasteries in 1535. Wytham was then acquired by Sir Richard Harcourt, and then Lord Williams of Thame, who later passed it onto Lord Norreys. The Berties family then took hold of Wytham when they became the Earls of Abingdon in 1682. At this time there were many freeholdings on the estate, which were gradually bought. This, and the Parliamentary Enclosures Act (1814) permitted Montagu Bertie, the 5h Earl, to acquire absolute control of the estate. Following this, Montagu made many alterations to the estate and village. Following his death in 1854, the 6th and 7th Earls inherited the estate. Both however showed less interest in Wytham it than Montagu had, and the 7th Earl then sold the estate to Raymond ffennel [sic] in 1920. 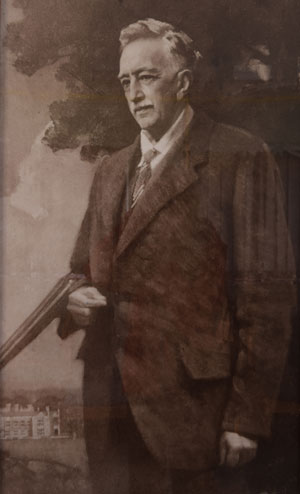 Born in London, Raymond William ffennel (1871-1944) (previously Schumacher) was the senior director of Central Mining, a gold-mining business, the biggest industry in South Africa. Although wealthy, ffennel was regarded as a philanthropist – purchasing Wytham to save it from development, and creating Hill End Camp as an outdoor education for children of the inner-city slums. Raymond also hosted evacuees in Wytham Abbey, where he resided, during World War Two.

Raymond’s only child (Hazel) died in 1939, and with no heirs to the estate, ffennel gave the woods to Oxford University in 1942. The remainder of the estate was purchased by the University in stages until Hope’s death in 1956. ffennel requested that the beauty of the woods, village and farmland was preserved. Almost all of the village is now owned by University of Oxford, except Wytham Abbey and a few other houses. The three ffennel family members are buried behind the church.

The ffennels helped to modernise the cottages, putting electricity and water into most of them. A report by the University in 1969 proposed infilling and extensive modernisation, though the voice of conservation prevailed and the historic beauty of the village was maintained. There has been minimal development in the village since the University took over, honouring Raymond’s bequest. The picturesque scenery of the village has been seen in many television and film productions, such as Inspector Morse, The Camomile Lawn and recently Mamma Mia 2 – Here We Go Again.

The existence of a church in Wytham dates back as early as 1480 when it was originally built. In 1811-12 the 5th Earl of Abingdon re-built this church using material from Cumnor Place and Godstow Nunnery to create the building present today. The 15th century windows of the chancel and the carved corbels in the nave roof are from the original church. The gateway dates back to 1573 and is from Cumnor Place. Recently, the creation of Benefice of Wolvercote and Wytham in 2011 joined All Saints’ Church to St Peter’s Church in Wolvercote.

A school was present in Wytham between 1858 to 1969. This was endowed by the Dowager Countess Waldgrave and later by Mrs Hope ffennel. The closure of the school in 1969 created money which was put into the Hope ffennel Trust, a fund for young people of Wytham up to the age of 25.  Both the Old School and School House exist today as dwellings. The Old School still has the cupboards where books were kept, and the high windows which prevented the children from being distracted by the outside. In the early days of the school, boys would leave at noon to help their fathers on the farm, and girls would leave at 2. When the school closed in 1969 there were only 9 students.

The White Hart Pub has existed on its current premises since 1726, though the present name was first recorded in 1854. Hall’s Brewery acquired the freehold in 1928, and is now owned by Wadworth.

[Information gathered from "The Changing Faces of Wolvercote, with Wytham and Godstow" by Ann Spokes Symonds; "Wytham Woods: Oxford's Ecological Laboratory" by Savil, Perrins, Kirby and Fisher; and "The Parish Of Wytham" by Margaret Sparks, written and sold for the benefit of Wytham Church]

Copyright © 2018-2021 Wytham Village
The Wytham Village website uses cookies to ensure you get the best viewing experience. By continuing without changing your settings, we'll assume that you are happy to receive our cookies.
I'd like to find out more... I accept I don't accept
Click to listen highlighted text! Powered By GSpeech